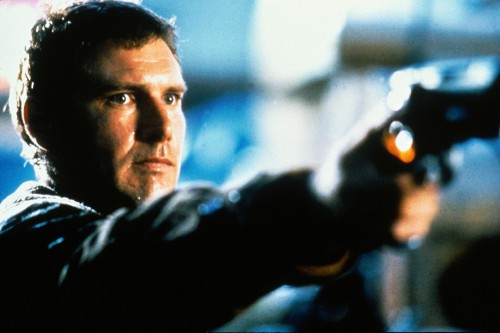 I know some out there will be saying, okay which version? I’ve no idea, I can never remember which is the theatrical version, the authentic version, the Director’s version, the version that some guy from the backlot of Paramount did in his spare time… I didn’t know (checking Wikipedia) that there are seven versions of the film.

Regardless of the version, I do like this dark vision of the future, the bleakness and the fact it is always raining.

I was going to talk about the “plot twist” but I am afraid I might annoy people who’ve not seen the film. Let’s just say I didn’t even suspect that “plot twist” for at least ten years, until someone spelt it out for me. I am not sure if it ruined it for me, or opened my eyes.

Looking at the film now, you suddenly realise how young Harrison Ford looks in it, it’s also an interesting move for him from a career perspective. He really came to the fore as Han Solo in Star Wars, then he was the 1930s adventurer Indiana Jones. I personally think that the role of Deckard was the role that opened doors for Harrison enabling him to take on a whole series of straight dramatic roles.

This is a cinematic advent calendar, and alas this is one of the few films I didn’t see at the cinema and I wish I had. I must look out for it if it is shown in the future.

Get the Blade Runner Ultimate Collection at Amazon.