On 11th September 2001 I went to work at Norton Radstock College in my role as Director of the WCC.

I was working in my office, when someone came and said a plane had crashed into a skyscraper in New York.

I went the BBC News website, but it wouldn’t load. I initially put it down to the college network, but of course realised later on that it was excessive demand on their servers which was causing their site to fail to load. I tried a fair few times to get the front page to load, but had no luck.

In the end I went to the canteen where the news was on the TVs in there and there was loads of people, students and staff, just watching the TVs. I wasn’t exactly sure what was going on, but as the day progressed it became much more apparent what had happened.

I listened to the radio news in my car on the way home, there was a lot more detail about what had happened, but less about the who and the why. We went to the gym and as I cycled away on the cycle machine the news was on the screens in front of me and the devastation and destruction was shown. It was awful. The cycle of news, of the plane crashing, the towers collapsing, the dust and debris cloud was right there in my face and it just added to my shock and disbelief.

Those memories of that day have stayed with me ever since then.

Towns and villages along the east coast of England were put on red alert on Friday 13 January. A combination of strong winds and high tides led to fears a “storm surge” would wash over flood defences, and residents of Great Yarmouth, Norfolk and Jaywick, in Essex, were among those ordered to evacuate.

In the end, the worst was avoided. The winds, tides and waves didn’t quite combine to cause serious flooding, and people have returned home. But this was not the first time the region had been threatened with inundation, and the flood defences that held firm in 2017 were largely built in response to a previous, more deadly, storm surge.

The worst natural disaster in modern British history occurred on the night of January 31, 1953. A tidal surge caused the North Sea to rise up to five metres above its average level, which led to widespread flooding along the east coast of Britain, particularly south of Yorkshire. Some 30,000 people were evacuated, 1,000 square kilometres of land was inundated, and 307 people in England and 19 people in Scotland died. The death toll was particularly bad on Canvey Island in the Thames Estuary.

In the low-lying Netherlands the consequences were much greater – more than 1,800 deaths. Soon after, the Dutch began to construct their huge and very costly system of flood defences.

The response in Britain was less decisive. Former chancellor and home secretary Viscount Waverley oversaw an inquiry, publishing a very effective report later that year. Waverley sought expert opinion on how best to renew flood defences and his recommendations included the creation of a new early warning system, quickly established, and the construction of a retractable barrier to protect London.

The long political machinations that eventually led to the passage of the 1972 Thames Barrier Act are fascinating in themselves, but what is more immediately arresting is the explanation Waverley offered for the tidal surge itself. For the first time, Waverley’s report made climate change a concern of government.

What caused the storm surge

Waverley explained that the flooding was caused by a combination of factors. Strong northerly winds coming in off the Atlantic coincided with a relatively high tide, thereby forcing an unusually large quantity of water down the narrowing north-south axis of the North Sea to the bottleneck at the Straits of Dover. The rotation of the earth ensured that the water was deflected to the west of the tidal currents, thereby hitting the east coast of Britain. A significant quantity of excess water was forced up the Thames Estuary, threatening to spill over London’s flood defences.

Waverley was at pains to point out that the high tide and the surge were distinct phenomena. Had the surge occurred at low tide, its effect would have been little noticed. Also, inland rainfall had been below average. Had east coast rivers been at their strongest, the destruction caused by the tidal surge would have been much greater, causing significant loss of life and damage to the capital’s infrastructure. Indeed, the risk to the London Underground conditioned much of the debate that followed.

The data presented to Waverley suggested that floods like January 1953 were becoming more frequent and that the combination of factors that produced them were likely to happen more often. There were three reasons for this. First, water levels were rising. By the 1950s scientists had known for a generation or so that the climate had been warming for a century, and that this was causing glaciers to melt.

Second, the phenomenon of tilt: the north-west and north of England was gradually rising and the south-east was gradually sinking – or downwarping – a notion that had some popular traction, especially in East Anglia. Downwarping compounded the effect of higher water levels and was also caused by climate change. At the end of the last ice age, glaciation had reached as far south as the line from the Bristol Channel to the Wash. With the weight of ice no longer acting on northern Britain, a gradual correction was taking place – and continues to.

Third, was the idea that changing weather patterns made tidal surges more likely. Sou’westerlies dominated the weather patterns of the region, but strong northerlies were becoming more prevalent, possibly as part of a 200-year cycle. For all these reasons the east coast, and London particularly, faced an increasing threat from the North Sea.

Thanks to Waverley, this thinking held sway in Whitehall in the decades that followed, shaping the tortuous process that led to the construction of the Thames Barrier. But if climate change was understood to be a factor in the growing threat to the east coast, there was little suggestion that any of it was caused by human activities. Instead, scientists pointed to the shift in and out of ice ages that occurs naturally over many thousands of years. Climate change, considered a force of nature, had yet to be politicised, even as it became a factor in policy making.

The threat climate change poses a given population depends as much on the capacity of the state to build adequate defences as it does on geographical good fortune. The debate of the 1950s and 60s also throws into sharp relief how politically significant anthropogenic notions of climate change have become.

Then, it was a question of defending vulnerable people and infrastructure against apparently natural phenomena, now the question of causation has hugely complicated and politicised possible government responses. This raises profound questions about environmental justice at both a national and global level. As the terrible flood of 1953 and recent events throughout the world have shown, it is poor, marginal people who drown in floods, whether in Britain or elsewhere.

This article was originally published on The Conversation. Read the original article.

So a royal baby has just been born and yes you kind of expect there to be some commemorative souvenirs. There will be mugs, plates and the usual colour pullouts in the papers.

Of course these are not really commemorative, just ways for companies and newspapers to make money.

There were some tweets on the Twitter that made you wonder what the PR companies were thinking when they posted them.

This image from Walls, makes you go, seriously…

Did Walls really think that people would be inspired to buy more ice cream as a result of seeing this image? If it was purely about saying congratulations, why on earth spend time and money creating this ice cream image, unless you thought it would raise your profile and make people buy more ice cream!

However for me, the one that me really go, seriously. was this toy.

What were Mothercare thinking when they released this Happy Land set… 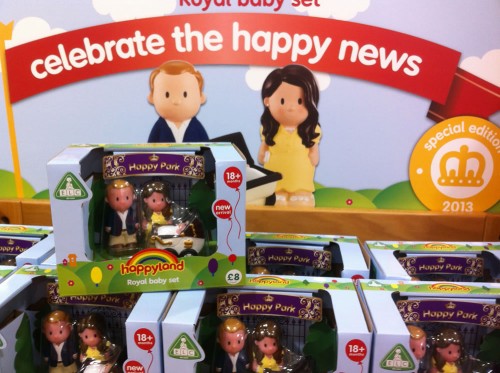 Seriously were they expecting the under fives to recreate the royal birth in play?

Alongside this you could buy a toy London bus and a toy Queen. All to “help” replay the royal birth through toys.

Strangely though no toy photographers or paparazzi…

Incredible video of Endeavour as she was moved slowly across LA.

Mission 26 The Big Endeavour from Givot on Vimeo.

The Space Shuttle Atlantis has touched down for the final time, ending 30 years of Shuttle flights.

Atlantis touched down in Florida at 10.57am GMT+1 just before sunrise after a supply mission to the International Space Station. Like the other Shuttles, Atlantis will be retired after undertaking this thirteen day mission.

I remember watching the first shuttle flight and been in awe. For me that was going to be the starting point for future space exploration. Despite everything that is been said by NASA and the US Government, I see the end of the Shuttle as a real slow down in manned space flight and it will take decades to catch up. The “next shuttle” should be ready now, but it won’t be for years if not decades.

The shuttle was an incredible machine, and shuttle launches always impressed me. It will be missed.