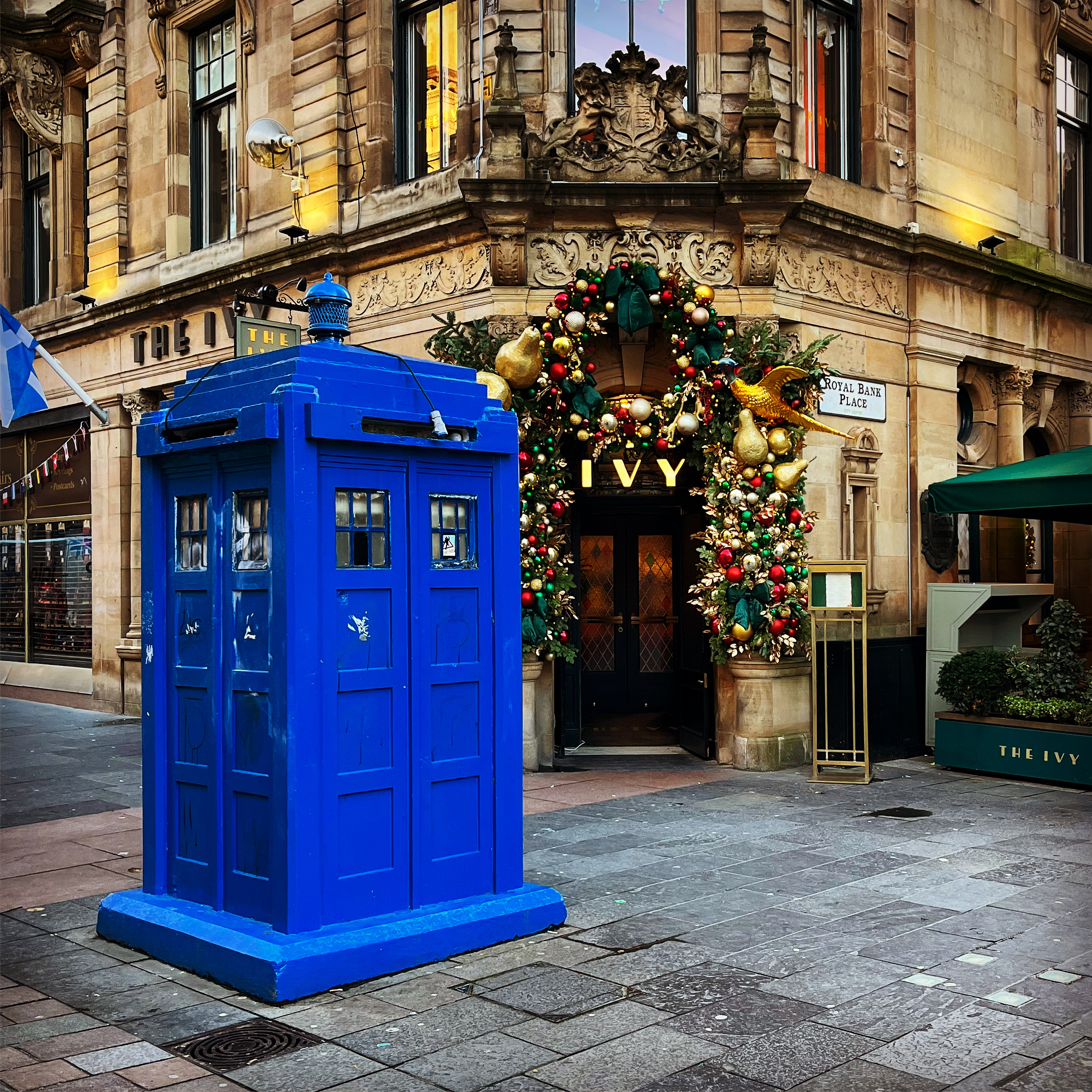 I know I shouldn’t be too excited about seeing an old Police Box on the streets of Glasgow these days, but as they are so rare these days, it did. Of course, it isn’t used by the police any more, nor is it likely that the Doctor will be travelling in it either. There is a red one just up the road from this one.

The BBC were filming Doctor Who in Bristol this week. Though I was in Bristol once this week I didn’t get to see the filming, but others did.

Bristol’s Old City transformed into 1920s London for Doctor Who. 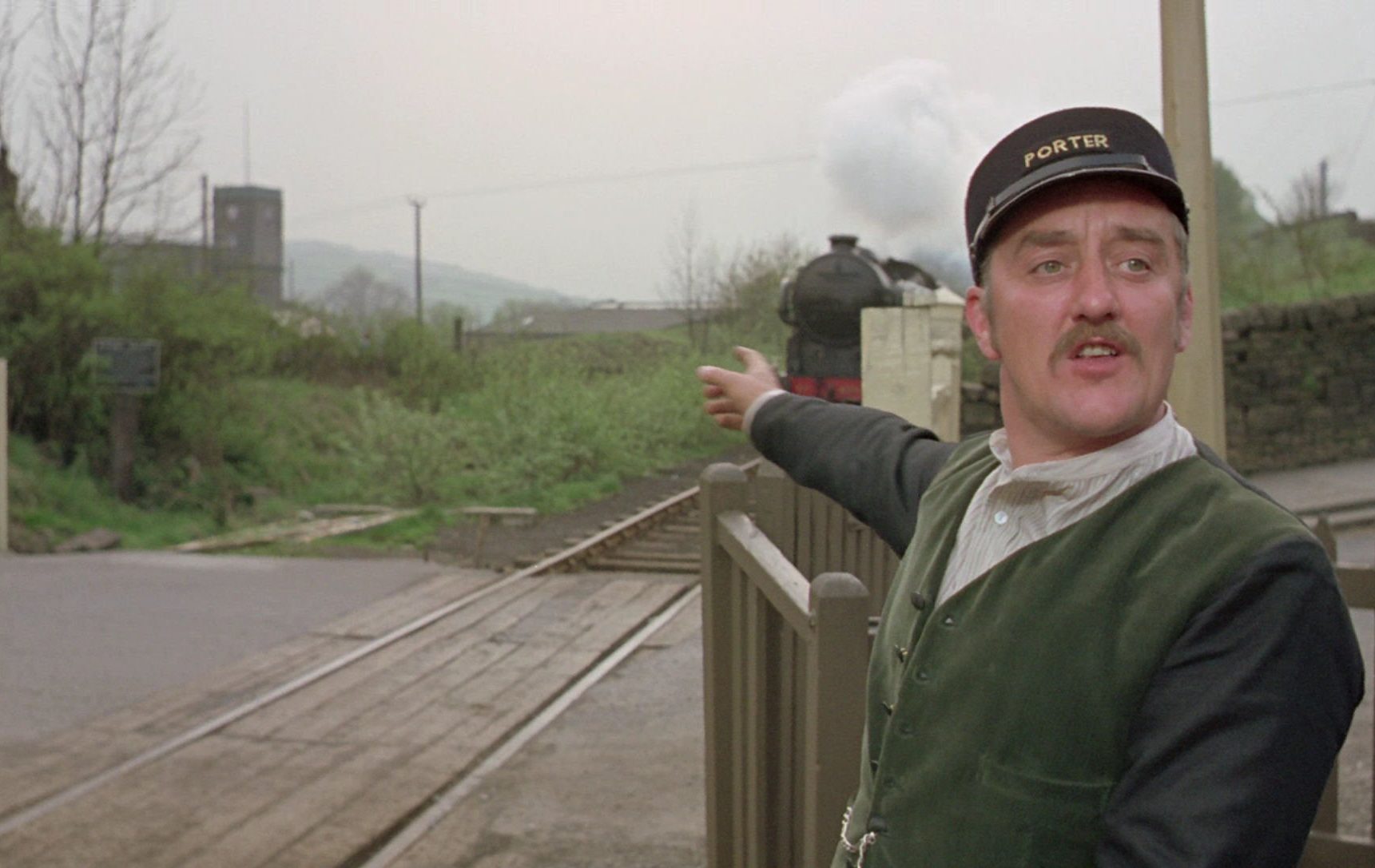 My first memory of Bernard Cribbins was as Perks in The Railway Children.

Of course he has been in so much more than that, I did enjoy his role in Doctor Who as well.

Another favourite of mine was his narration of the original Wombles.

We have a teaser trailer for the Christmas episode of Doctor Who, featuring Captain Jack.

The episode was filmed before the March lockdown. Looking forward to it. 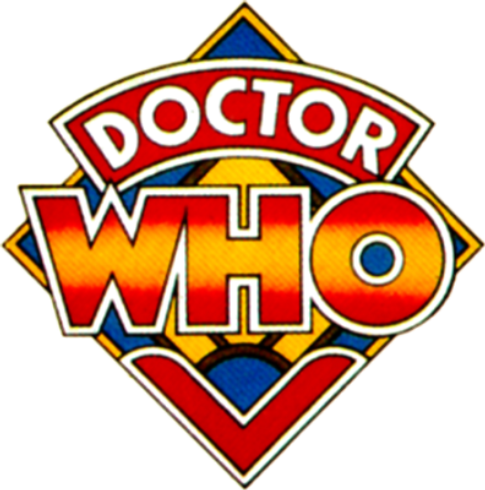 My doctor was Tom Baker.

I do remember watching some of the Jon Pertwee episodes, but I remember watching Robot, which was Tom Baker’s first episode as the new Doctor Who and was about a Giant Robot. The special effects were both amazing and terrible, the big robot was awesome, but when they sent in the British Army, the tank they used was an Action Man tank, I had one of those. It was pushed into shot with the appropriate sound effects.

I think that was one of the things with Doctor Who in the late 1970s, having seen the amazing Star Wars at the cinema and various TV shows such as Buck Rogers and Star Trek, the special effects that the BBC used with Doctor Who were both sometimes awesome and sometimes laughably bad!

Doctor Who was one of those series I remember making time for. Part of the reason was I liked it, but also a whole season was often made up of a series of stories told in a number of episodes. If you missed an episode it was not always easy to work out what was going on.

I really loved the Tom Baker years, what with Sarah Jane Smith, K9, Romana and Leela. There were some stories which I remember vividly and still resonate with me today. Genesis of the Daleks has always struck me as probably one of the greatest Doctor Who stories. This was where they introduced Davros, but also asked that huge philosophical question, about time travel, should the Doctor stop the Daleks at the moment of their birth?

Then there was The Seeds of Doom, the story when the plants fought back. I also remember the robots from Doctor Who and the The Robots of Death, these seemingly docile robots, who are anything but docile. The Pyramids of Mars was a great story and I loved the Egyptian connection and the paradox of time travel that confounds Sarah Jane Smith. The Talons of Weng-Chiang scared me silly back then and I probably wouldn’t watch it now because it still scares, and the fact that they used stereotypical representation of Chinese characters and an unconvincing giant rat!

When Tom Baker regenerated into Peter Davison, I kind of lost interest in Doctor Who, and stopped caring if I saw it or not, maybe it was linked to the fact I was growing up.  Though having said that I did enjoy Sylvester McCoy’s interpretation of the Doctor and Remembrance of the Daleks is probably one of my favourite stories of all time, up there with Genesis. I also loved the Curse of Fenric story set during the second world war.

Initially I didn’t really miss Doctor Who when it was axed by the BBC. Even so when it was brought back to our screens in 2005 I did start to watch it again. I really liked the new production values and I have enjoyed many of the stories. One thing I didn’t like about the new relaunched series were the stories which we know could never have happened, like the whole Dalek invasion of earth or when the earth was moved in “The Stolen Earth”. What I remember about the classic Doctor Who was that these things could have happened in our world, just that they were hushed up by the authorities. Remembrance of the Daleks could have happened, but it was just never reported. I really liked the idea that the Doctor was “real”, so was UNIT, but all the things that happened just never made the news. If the earth was moved across the galaxy, it would probably be on wikipedia!

I do like the quintessential Englishness of the Doctor, even if now and again he speaks with a Scottish accent. I like his non-violent approach to problems, even though if now and again by his actions things don’t go right for the bad guys. I love the Tardis, just a bizarre concept and even now when I see an old Police Box (usually on the streets of Glasgow) I think there’s a Tardis.

I not only remember Doctor Who, I am fond of the new series too.

So who was your Doctor?

Standing proud in the centre of the foyer of the Bristol Museum you can find the clockwork inspired 7. A Grand Gromplication 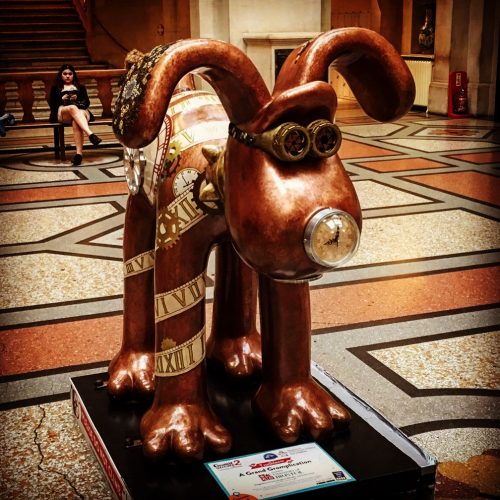 There are clocks and gears across the whole sculpture. 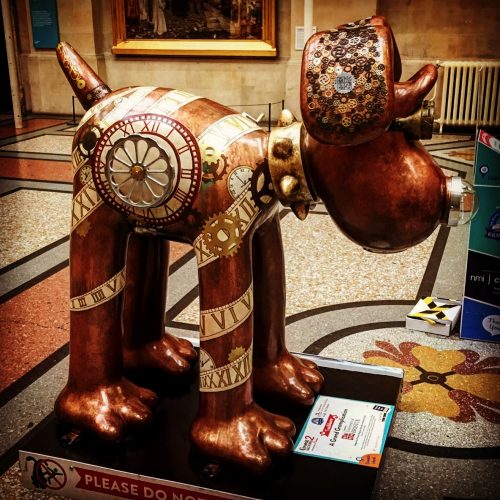 I love the working clock on the nose. 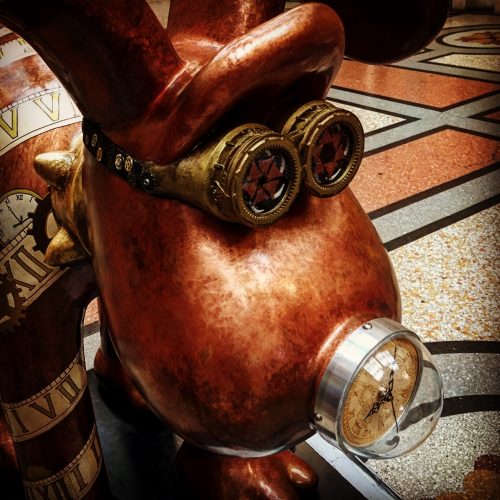 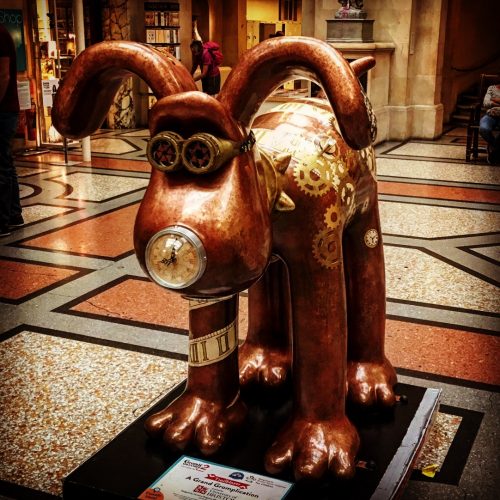 With these clockwork decorations I was reminded both of steampunk but also the clockwork robots from Doctor Who, which the clock bands are also reminiscent of the Calpadi era title sequence. 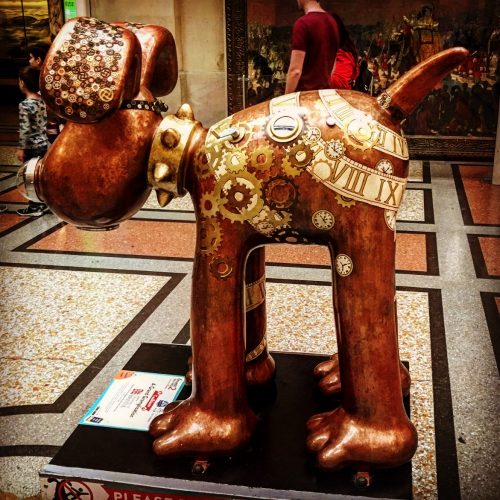 All the introductory sequences over the years from Doctor Who.

Though they have been removed from most high streets across the UK, in Glasgow you can still find Police boxes, the kind that the TARDIS disguised itself as back in 1963 when it landed in Totter’s Lane junkyard.

There is a police box at 27 Sauchiehall Street in the heart of Glasgow. 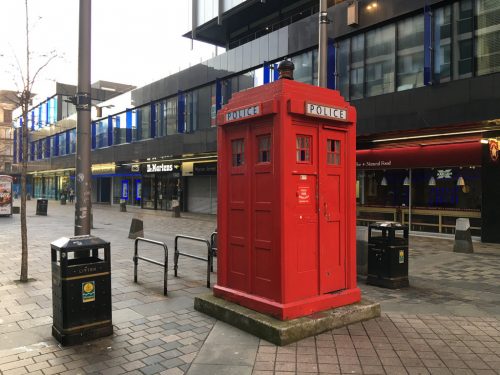 It’s red though, not blue.