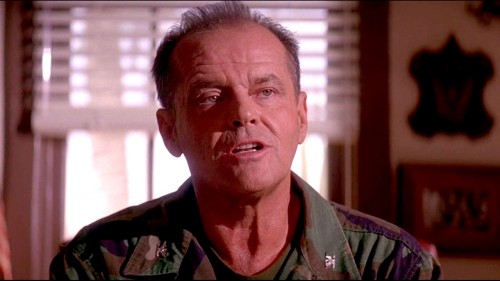 “You can’t handle the truth!”

Though featuring Marines and Navy officers, this film is a legal drama, it’s about a courtroom battle not a military battle. Of course this is Hollywood, so it probably bears no resemblance to reality, but does that matter? It’s a film not a documentary. For example most courts martial take place in plain simple rooms, not ornate courtrooms, and those dramatic lawyer moments just don’t happen. Despite that, this is a great film.

Of course part of the reason is that the screenplay (and the play the film was based on) was written by Aaron Sorkin, who in my opinion has written some fantastic screenplays and television. I really liked Studio 60 on the Sunset Strip and the West Wing. I was disappointed when Studio 60 was cancelled, as I thought it had a lot of potential. The West Wing was also excellent television and extremely well written. A Few Good Men was of course written well before these televisual delights.

This for me is Jack Nicholson’s best film, likewise Tom Cruise and Demi Moore are really good, and though they could dominate the film, they don’t. They share the screen with their co-stars and as a result this isn’t a star driven picture, this is a story driven one.

Get A Few Good Men at Amazon.