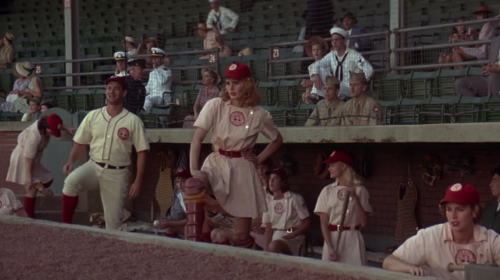 A League of Their Own

is one of those films that on the surface I really shouldn’t like, however it’s probably one of my favourite films of all time.

It should be noted that I really don’t understand everything about baseball, but when this film came out in 1992 I was in a “baseball phase” I was watching baseball films and reading books about baseball. I went out and bought and read Shoeless Joe

by W P Kinsella (it was made into the film Field of Dreams). In many ways baseball was the background to the stories, the stories themselves were not about baseball.

The first time I watched it, I had rented it on VHS from my local corner shop where I use to rent films from, this was in the days before Blockbuster! I think another reason I picked and watched the film was that I had really enjoyed Tom Hanks in Big

and he plays Jimmy Dugan in this film, an embittered coach who at first can’t believe he’s coaching a “girl” baseball team. Eventually he does come round to the fact that these women can play and can play well. 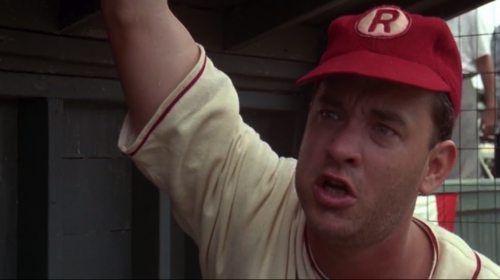 There is no real plot to the film, there is no romantic core to the story. This is a story about a team of women coming together, working and playing together during a difficult time in history and making a difference.

There is humour and comedy, larger than life characters as well as some very emotional scenes.

Historically there is a fair bit of poetic licence taken by the film with actual events and people. For example the film indicates that the games weren’t popular with the crowds until the teams introduced gimmicks (sliding splits). However in reality the games were popular from day one as people had been really missing live baseball games and as a result there were huge crowds at the games.

I like this film, it is a feel good movie and something that I would watch on a rainy sunday afternoon.

There was something very clever about the story and the emotional journey that the women in the film were on. It reminds us that in the 1940s equality was a dirty word for many people and women at that time were nowhere in the same league as their male counterparts in both life, work and sport.