As a young kid I didn’t go to the cinema very often, but one film I did go and see, and had to queue all around the market square in Cambridge for, was Star Wars.

I didn’t go to the cinema very often when i was young, but I never remember really long queues for films, the queue for Star Wars was unprecedented, it was huge. I have never seen anything like this again.

Star Wars was, and still is, an amazing piece of cinema. When you read the back story you realise that when they were making the film, they had no idea how big it was going to be, many of the cast and crew thought it might be a flop. There were disasters on set, including massively destructive sand storms in Tunisia.

The story was simple in many respects, but this is a true cinematic film. That opening sequence with the never ending huge Star Destroyer set the tone for the rest of the movie. I really loved the retro feel of the technology and this slightly worn, aged tech look was used again many times by other films and television series. Battlestar Galactica is an example of copying the feel and style of Star Wars tech, so much so, there was a court case about it. 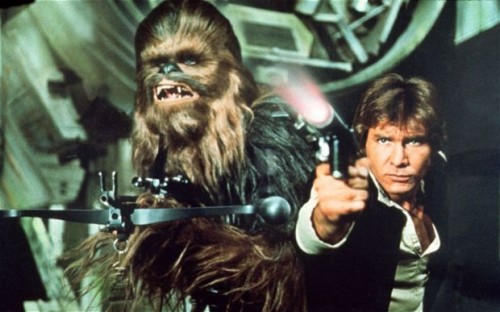 The one thing that you can say about Star Wars was the impact it had on science fiction films and television, it made them mainstream. It was only a couple of years later and we had Star Trek films, there was also a range of science fiction mainstream television series too, as well as the aforementioned Battlestar Galactica, there was Buck Rogers. Some were good and some were downright awful.

Of course Star Wars became so much more than the one film from 1977, three years later there was the Empire Strikes Back (which I didn’t see at the cinema, but many say is a better film than the original) and then in 1982 we saw Return of the Jedi. I did see that at the cinema, but there wasn’t the queues there was in 1977 and in many ways was nowhere near as good as the original film. I remember going to see the “enhanced” versions in the 1990s before the release of the prequels and I did enjoy watching those films again in the cinema. There is something very different about the cinema experience over watching something on the telly or an iPad. I remember really enjoy Empire Strikes Back at the cinema.

I’ll be honest I was not that impressed with the prequels, they didn’t have the magic that we saw in the original three films and the use of CGI did not improve the movies, many of the effects shots were too “clever” and didn’t progress the story, whilst I thought many of the CGI sets looked rather fake. For me they weren’t Star Wars, they were another science fiction film.

Get Star Wars at Amazon.