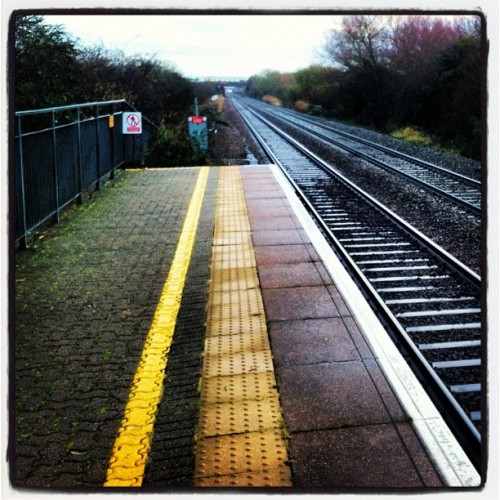 What with the bad weather and all that I wasn’t expecting travel to work today to be smooth and easy.

I have recently been catching the train to work, it takes twice as long as driving, but with current fuel costs it is slightly more economical and I can do a lot more work on the train than in the car!

I got into the car to travel to my local station (not got a bike sorted out yet) and my usual trip was disrupted due to excessive flooding on Summer Lane Bridge. It was closed and as a result I got turned around by the police. By the way the bridge, which is a railway bridge, was not flooded, but the approach road was. Getting to the station was a little more difficult, but luckily it was early.

I had checked the trains before I left home, some had been cancelled, but not my usual train, so went straight to the ticket machine and got my train ticket. It was literally seconds after that I found out my train was cancelled. At that point I needed to make a decision. Did I get back in the car and drive to work or wait until the next train. According to the disembodied voice on the platform the next train was an hour later. I wasn’t entirely confident at that point, if I could get a refund if I didn’t use my train ticket. So deciding to wait for the next train, I went to get some coffee. Alas not much choice near Worle station, my first choice, Sainsbury’s wasn’t open, so I went into McDonalds! Not really where I wanted to go, but I got a coffee and they did have free wifi, so got on with some work.

After about forty minutes I ventured back to the station to catch the train. Disappointed to find that this one was marked as delayed with only a few minutes to go. I did wait, but in the end with the train been delayed by about twenty minutes from departing from it’s starting station and the result would mean I would miss the connection at Bristol Temple Meads and so would be even later into work, I decided to give up and work from home. Even then due to traffic chaos (caused by not one by two bridge closures) it still took me nearly thirty minutes to drive the two miles home!

With all the weather we’ve been having, I was also concerned about not just getting to work, but getting home again. It wasn’t really a nightmare, not like some of the stories I have been reading about, in the main as I decided that in the end it was going to be better not to travel.

Tomorrow, it’s a bit more challenging as I will be going to the Forest of Dean, driving as it’s impossible to get there by train. Wish me luck.

One Reply to “Travel Nightmare”