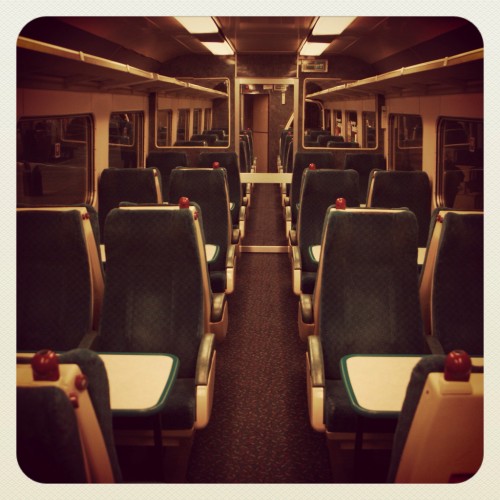 What’s the point of the Quiet Zone Carriage?

Twice today I have travelled in the Quiet Zone Carriage, first with First Great Western and secondly with CrossCountry. Both times there were people in there listening to their personal stereos really loudly! Though of course for everyone else in the carriage had to put up with the irritating tinny music.

To be honest I would have been annoyed with it, even if it had been a “normal” carriage. One of the reasons I listen to music or radio on the train is often to drown out the tinny music from others. However with respect to other people I don’t listen when I am in the Quiet Zone Carriage, as I know they don’t like it.

Now I would stand up and ask the person to turn it off, however I have no idea where they are sitting in the carriage and from my seat I can’t actually see who it is. Also the noise I would make asking them to turn it off, potential argument, would annoy people even more I think, well it does when I hear it.

Virgin Trains use to have a weird Quiet Zone policy when they ran the franchise (now run by CrossCountry) you couldn’t even use your laptop in the Quiet Zone Carriage. This was just use it, for reading, writing, not listening to music or watching a film. I remember one woman getting very irate I was using it, even though she made significantly more noise shouting at me then I was using the laptop. She got very hot under the collar, so much so, that the guard made an announcement over the tannoy about not using laptops in the Quiet Zone Carriage.

Talking of announcements I am reminded again of Virgin Trains where the buffet person when we were arriving at Birmingham, where he was getting off, he thanked us for been a lovely audience!

I have to admit I don’t really see the point of a Quiet Zone Carriage on a really busy train, mainly as trains are very noisy things anyway, lots of engine noise, and announcements. Those within it, even those been quiet, have conversations, chat, tap away at keyboards, breath, drink noisely, snore and so much more.

The question is, with a small four carriage train, can we really afford to have a Quiet Zone, well one that works as it should?

One Reply to “You have entered the Quiet Zone!”