, even thought about V for Vendetta, but when I thought about it, from a cinematic perspective I like Brazil best out of those three films. 1984 is a great film, but is an incredible book, especially when you consider it was written in 1948. A powerful vision of a dystopian future where Big Brother knows all and there is not just no freedom, but no freedom of thought. However though I think the book is superb, I am less enamoured by the film.

Brazil, which has a similar dystopian future to 1984, is much more surreal, but also contains more humour. In many ways it is just as bleak as 1984. 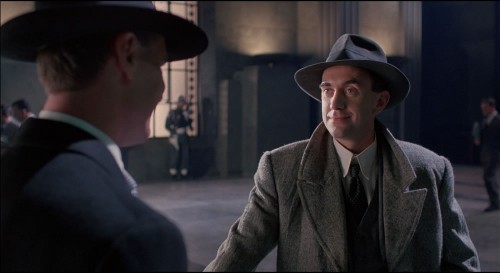 Brazil certainly has an interesting cast, and I certainly would not have made the casting choices. Having said that I do think it works. Robert De Niro does an excellent job as the air conditioning engineer, Tuttle.

The fantasy scenes are intriguing, but for me do work well and contrast with the greyness and drabness of the “real” world. I also love the ending, which is really clever and I remember been genuinely surprised.

If you enjoyed V for Vendetta

, then do check out Brazil.

Get Brazil at Amazon.