If you have ever watched any of the Disneyland adverts you will appreciate how this was made and filmed. Very clever.

Well, well, well, after much speculation about the so called filming for a feature film in the Tropicana in Weston-super-Mare, it was announced today that it is a modern art exhibition by Banksy and many other modern artists.

Dismal Land – a festival of art, amusements and entry-level anarchism.

Are you looking for an alternative to the sugar-coated tedium of the average family day out? Or just somewhere a lot cheaper?
Then this is the place for you. Bring the whole family to come and enjoy the latest addition to our chronic leisure surplus…

“I loved the Tropicana as a kid, so getting to throw these doors open again is a real honour,” said Banksy.

It will be on view for five weeks (or is it six) with tickets at £3 each limited to 4000 a day. If this is going to be anything like the Banksy show at the Bristol Museum, this will sell out very quickly and will be very popular. 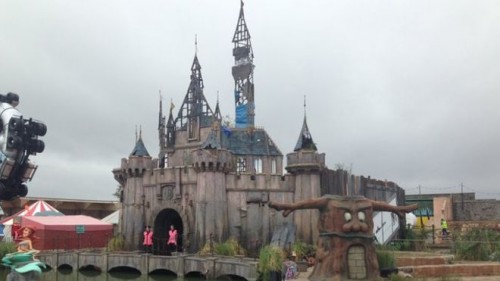 Having passed it a few times over the last week I did wonder what was going on. The construction crew behind it all were all staying in caravans close to the railway station. There was talk it was a film crew, but once the tanker truck could be seen along with the disney’esque castle it seemed to be less a film, more likely something else. I did think it might be a crystal maze type TV show, but the more you thought about it, the more likely this was something else. Once the Banksy rumours started earlier this week, then it was pretty obvious it was going to be Banksy.

Looking forward to going and having a look, and as a local I might try and get in for free tomorrow.