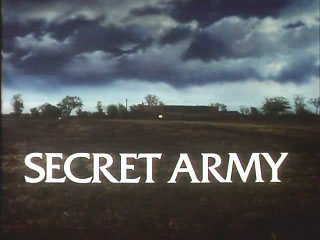 Today is about BBC’s Secret Army.

One of the reasons I wanted to write this series of blog posts was to remember some of those series I watched in the 1970s and 1980s that I remember with nostalgia and fondness.

The series tells the story of a fictional Belgian resistance movement in German-occupied Belgium during the Second World War dedicated to returning Allied airmen, usually having been shot down by the Luftwaffe, to Great Britain. It was made in the UK and Belgium and three series were broadcast on BBC1 between 1977 and 1979.

Though this series was eclipsed in some respects by the comedy ‘Allo ‘Allo which was a pastiche of Secret Army, I remember this series well and many of the plots and stories. Of course one thing which is often forgotten or confused was that Secret Army wasn’t set in France, but was set in occupied Belgium.

A few years ago I borrowed a copy of the series from a relative and watched the whole series from start to finish over a few weeks. It was just as good as I remembered. I may have not watched the first season when it was first broadcast, as it seemed (and is) different to the second and third series. As with many series recorded in the 1970s there is a quite a difference as indoor scenes (shot on video tape) cut to outdoor scenes (shot on film). That different grading was quite marked and is something that of course we don’t see today with the use of the same (digital) cameras for both internal and external sets.

The stories were powerful and you started to have a very slight insight into the horrors and struggles that the people who lived through the Nazi occupation had to suffer. One story I remember well was the story based around Operation Market Garden and the impact of that assault on civilians in the background. I think that was one of the powerful aspects of the series, this was not about military forces, but was about the civilians struggling under military occupation.

I also felt that the liberation was covered well, in that it wasn’t this straightforward change of state from occupied to liberated. The confusion over who had collaborated and who hadn’t, and the vigilantism that went on.

And of course the closing credits were a classic.

Get Secret Army on DVD.