You should be more like him, Him I could believe, you know, with the crazy hat and that flashy umbrella, what else could he be but an agent? You should all be like that, makes my job easier.

I was not around when the original Avengers was broadcast, but I do remember watching the New Avengers. It was broadcast originally in 1976 and 1977, so I wasn’t that old. It was a sequel to the original 1960s series, something which I have seen, but not a great fan of to be honest. It’s fun, but I can take it or leave it.

In The New Avengers there were three stars, Patrick MacNee returning as John Steed from the previous series, Joanna Lumley as Purdey and Gareth Hunt as Mike Gambit. Did Purdey have have a surname? 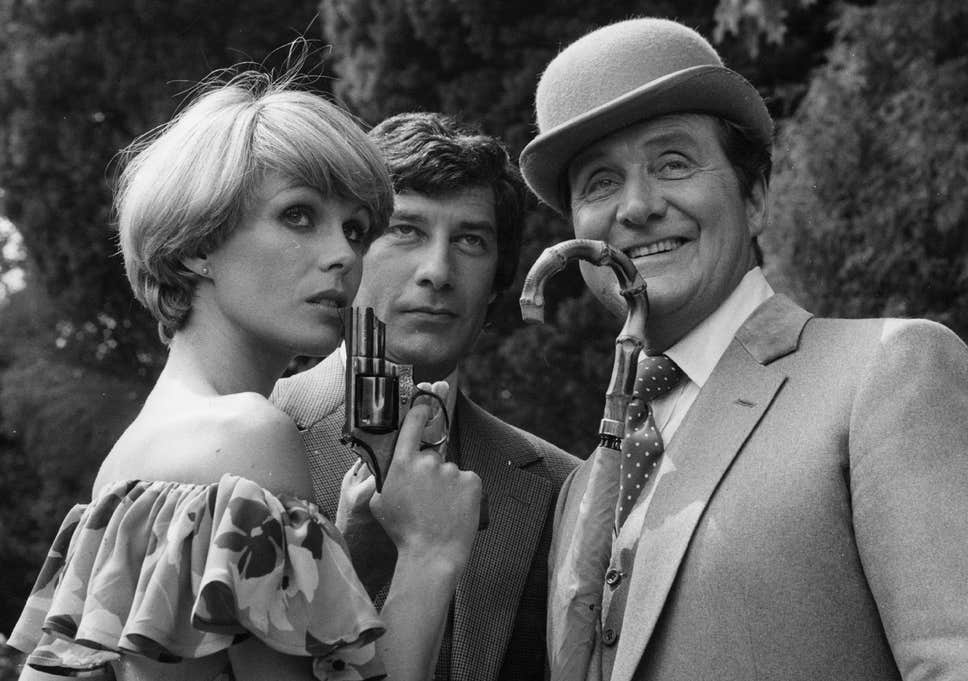 You never really know who the New Avengers were, were they British Intelligence? A special police unit? Regardless, each week they would be undertaking some dangerous mission or stopping some fiendish plan from taking place.

Unlike some older series I have in the calendar I do remember some of the stories, the first episode the Eagle’s Nest, where a scientist with the ability to resuscitate frozen bodies is kidnapped by Nazis hoping to revive Hitler’s frozen corpse, was one I remember well. As was

Target where vacationing agents die after attending a training centre, they got hit by the “fake” weapons and had. a red dot on them. The series was about what happens after Purdey attends the training centre.

Another aspect of the series I remember was the Corgi models, and they probably reinforced the memory of the series, though I never actually had any of the toys, I did see them in the Corgi catalogues of the era. Purdey had a yellow Triumph TR7, Steed had a Range Rover and Gambit a Jaguar XJS. Though today this does appear to be reinforcing both class and gender stereotypes, which was probably something prevalent in the series as well.

That’s the thing these days with being nostalgic about old television series, often those series reinforced the inequalities of their day, with stereotypical portrayal of gender, class and ethnicity. You can sometimes feel guilty about enjoying an old TV series, this was something that Friends has had to deal with when it became popular again after being available on Netflix. I do think though that the fact we now recognise that these series got it wrong, is a good thing. Imagine if we though it was all okay!