On a recent visit to Longleat Wildlife and Safari Park we rode on the Miniature Railway. It reminded me that we, as a family, had done this quite a few times over the years. So when we got home I looked over my photographs and it bought back lots of happy memories.

The 15 inch railway was established in 1965 and expanded in 1976. The track has changed over the years, but currently skirts the lake before heading back to the station through the trees. There is a tunnel and a halt which is used at Christmas.

My first visit to Longleat was in the early 1970s, of which I don’t remember much, and I am not even sure if we went there. What I do remember was going to sleep, having an amazing dream about going to a Safari Park and getting a safari themed Land Rover in the shop. 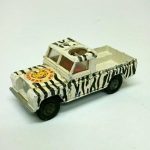 When I woke up in the morning, I was astounded to find the Land Rover in my room.

Was it a dream, was it reality? No idea if I travelled on the railway, it was just a dream…

Myself and my wife visited in 2002, but I don’t think we travelled on the train, as we only did the safari park. Back then the train was an extra cost, as were most of the other non-park attractions.

As a family we took my son to Longleat in 2005 and as well as going around the Safari Park, we also travelled the railway. He was really into trains.

We were pulled by the Ceawlin, locomotive number five.

In this photograph you can see the Lenka Railcar, the only engine built at Longleat. It was sold to private owner in 2017.

We went again in 2008, but I have no photographs of the train, but I am pretty sure we must have had a ride on the train back then.

Between 2011 and 2017 the railway was known as the Jungle Express, with the station and carriages given additional theming.

We visited in 2012 and travelled on the Jungle Express.

This time the train was pulled by the Flynn Locomotive.

I do remember that the station had a model railway shop, but by our visit in 2012, it had stopped selling model trains and now sold toy trains, wooden trains and stuff.

On our most recent visit the Jungle Express theming had gone, as had the shop.

The railway has fifteen carriages, all built at Longleat between 1976 and 2013 and are now wearing mock British Railways crimson and cream livery The railway also has several permanent way wagons.

This time our train was pulled by the huge John Thynn.

We enjoyed our most recent visit and I expect we might go again some time in the future.

One Reply to “The Longleat Miniature Railway”