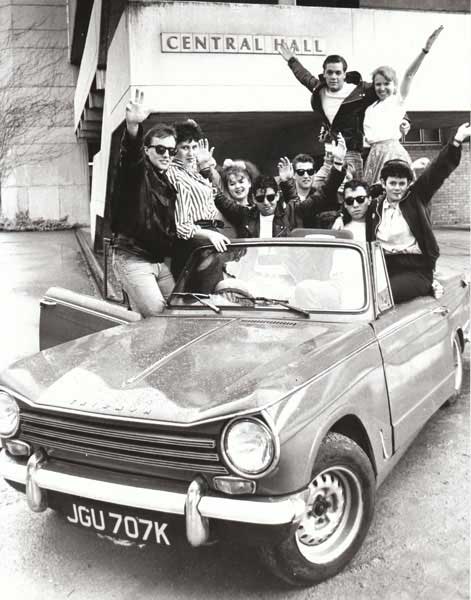 The photograph is from the 1988 production of Grease at the University of York, the car nearly did drive off the stage…

It was a nightmare getting the car, a fantastic red Triumph Herald,  on stage, as tit had to be manhandled up the stairs to the first floor where the stage was. The engine luckily had been removed.

On the first night during the Grease Lightning song, the car was pushed from the back of the stage to the front, at which point the bloke driving the car couldn’t see the edge of the stage and nearly “drove” into the orchestra pit! I don’t think the audience noted, but you could tell the orchestra did, as the music went off key ever so slightly, as some of the musicians got scared of getting crushed!

I wasn’t in the production, something to do with the fact I couldn’t sing or act… however I was part of the team that sold tickets and managed the event on the days the musical was staged, so I got to see it every night it was on.

Nearly thirty years later, your mind will recall things slightly differently to the way that it happened, my memory recalls the performance as been very professional and really good. Great music, wonderful singing and a memorable performance.

Sadly I have no memory for names, so couldn’t tell you who is in the picture.